In August 2018 we said goodbye to our much loved conductor of 25 years, Bob Bridges, and welcomed our new conductor Dimitri Chrysostomou.

When Bob took the helm we had around 25 players at that time, which quickly doubled to 50 in just a year or so. Bob had a sense of the direction that he wanted the band to take and encouraged us to think big.  Bob took the band on a very exciting journey and  there will be lots of talk and memories about the different concerts, great opportunities and the fun that we have had over the years, such as starting to play a Spring and Autumn Concert in larger and larger venues, all well attended, with up to 75
musicians.

There were many challenges as the band developed but Bob encouraged us to be positive and welcome change. We felt that we wanted to say just how very lucky we have been to have had Bob as our musical director and conductor.

A community band is a tricky thing to manage for all sorts of reasons but Bob has been able to create an ethos and philosophy of  being inclusive to all its  members. This has paid off as many members comment on how friendly and welcoming the band is – some have stayed for a very long time indeed.

This is all down to Bob’s leadership which has maintained a tone and atmosphere of an open and friendly place in which to share the fun and joy of making music. We believe this is something the band should be very proud of. Bob has seen many members of the band come and go but has always welcomed players no matter what their ability. We have therefore been lucky to have had both very good players and those that are still learning. Bob has always been hospitable and taken the time to talk to players especially newcomers. Bob has been a stalwart in the background, and worked tirelessly, ferrying around both players and equipment and organising deps as well visiting venues to ensure their suitability. In the past Bob hosted many social events so that band members had the opportunity to talk to him as well as meet other members of the band and feel included

When Bob first started with the forerunner band of SLSW, he had a great  vision for the band and we hope that he has felt that he has achieved this.

We hope you will join us in wishing Bob every success for a long and fulfilling retirement. We sincerely hope that the legacy of Bobs inclusive style and approach will be carried with us as we move into this next chapter. We have had many enjoyable years under Bob’s leadership. All the best to Bob for the future. 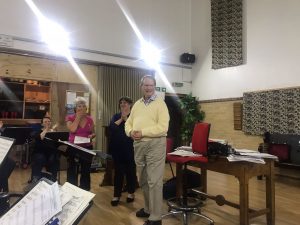 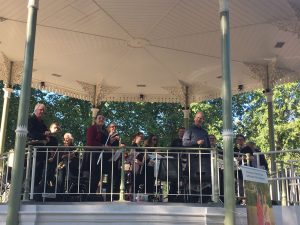